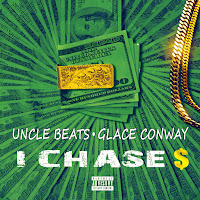 Chicago, Ill.-Putting down their poignant pen game atop sonic, up-tempo production provided by Poland-
born music maestro Dreamchaser, ghostwriter extraordinaire Glace Conway and highly proclaimed
producer/ rapper Uncle Beats come together to release lavish new single “I Chase $” from the Blood of a King Entertainment compilation on Blood of a King Entertainment.
Over hypnotic synths and a polyrhythmic drum track, Glace guarantees that he has been living
extravagantly for a long time. In a confident flow, he boasts, “I been, been doing this s**t since I was a jit/ And I been getting money but it ain’t been legit.”
“My music is street, but it’s more than street,” Glace explains. “My music has a purpose. I want to
provoke and invoke thought. Because I understand the demographics of the streets, I can give them music that they can relate to, but at the same time, I’m exposing these lost minds to other elements of life and survival.”
Most notably known for his prowess behind the scenes, Uncle Beats also flexes his stacks of stacks and demonstrates his hustler-player style. On the track, he raps, “I rock a Rolex. I can’t nothing less. I keep some diamonds in my charm hanging from my chest.”
“We’re saying get the money and stop chasing foolish things,” explains Beats. “Everything I put out
comes with a bit of advice. My music lets people know of my accomplishments, but it also lets people know that they can do it too.”
Both artists were born and raised on the South side of Chicago. Glace comes out of an area known as the “Wild Hundreds.” Beats is from the Englewood area, and both artists have the kind of musical resumes to make Chi Town proud. Glace Conway earned his stripes penning rhymes for artists such as Benzino, Lil Zane and Raven Symone, gained platinum accolades writing for Lil Kim and was at one time the flagship artist on ex-drug kingpin “Freeway” Rick Ross’ label Rick Ross Music Group.
After spreading his wings to other endeavors, Conway teamed up with music industry
veteran and co-CEO Branden “Bookie Billion$” Booker to form his own label Blood of A
King Entertainment.
With just an impressive resume to match, Uncle Beats cut his teeth in the music industry as a promoter and booking agent for artists as diverse as Jay-Z, R. Kelly and the Geto Boys. As an entrepreneur, he founded Low Down Productions in the late 90s and later launched the Gwop Gettas promo team. Since, he has released five studio albums.
And together, they have released an arsenal of music, including Trafficking the Mixtape, hosted by
Project Pat and Freeway Ricky Ross and Check A Bag soundtrack, hosted by DJ Ad Baby of Coalition DJs. On their newest joint venture, they drip with riches on new single “I Chase $” from Blood of a King Entertainment. And just as gaudy as the song, the visually striking video for the single is directed by Crunchy Black of multi-platinum group Three 6 Mafia.
https://www.instagram.com/unclebeats/
https://www.instagram.com/glaceconway/
Share